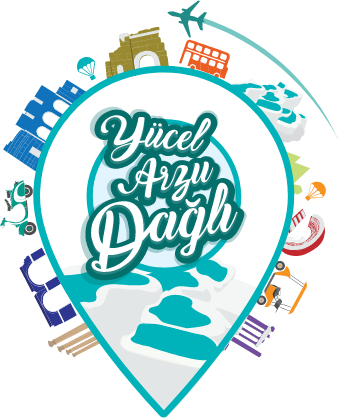 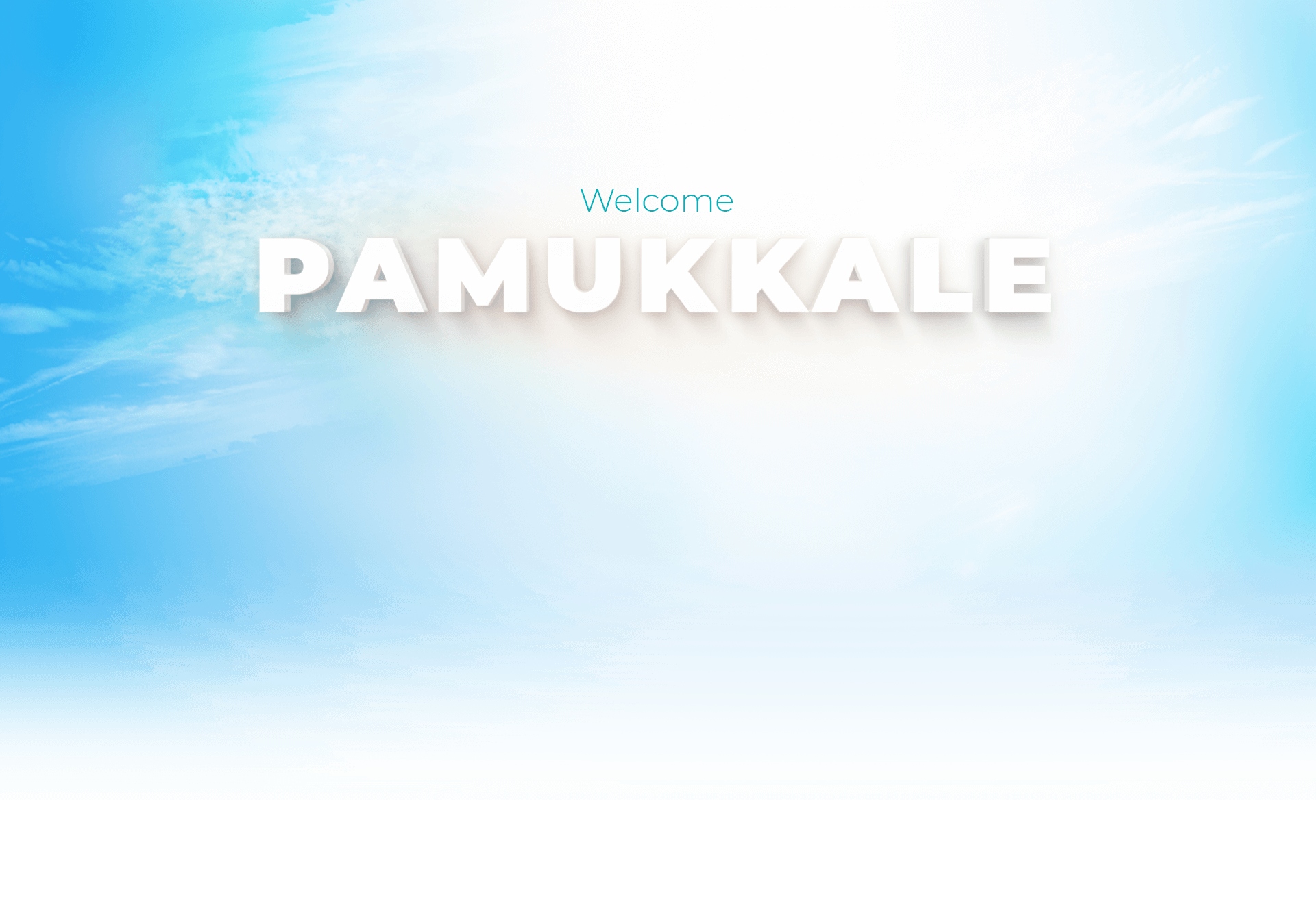 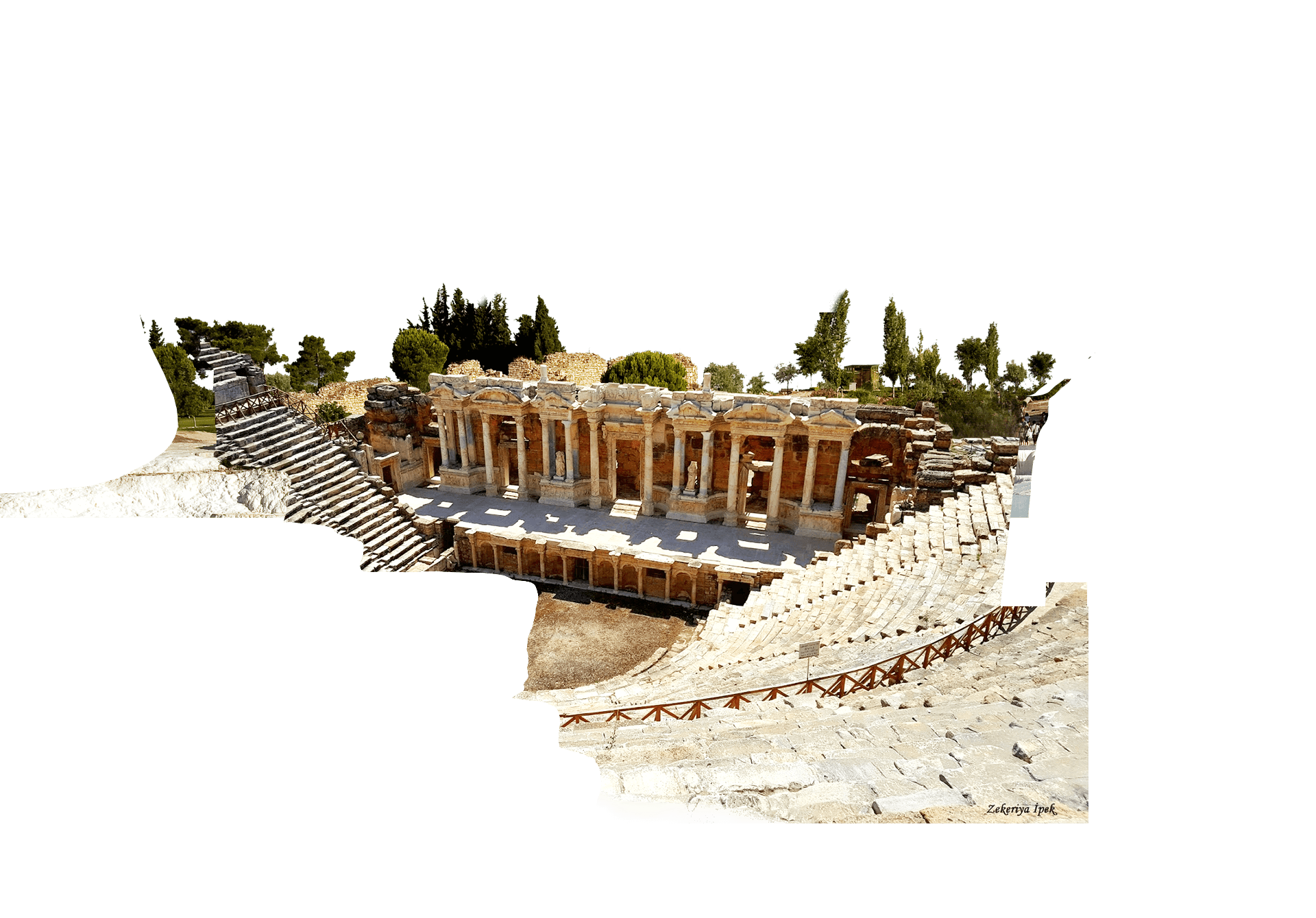 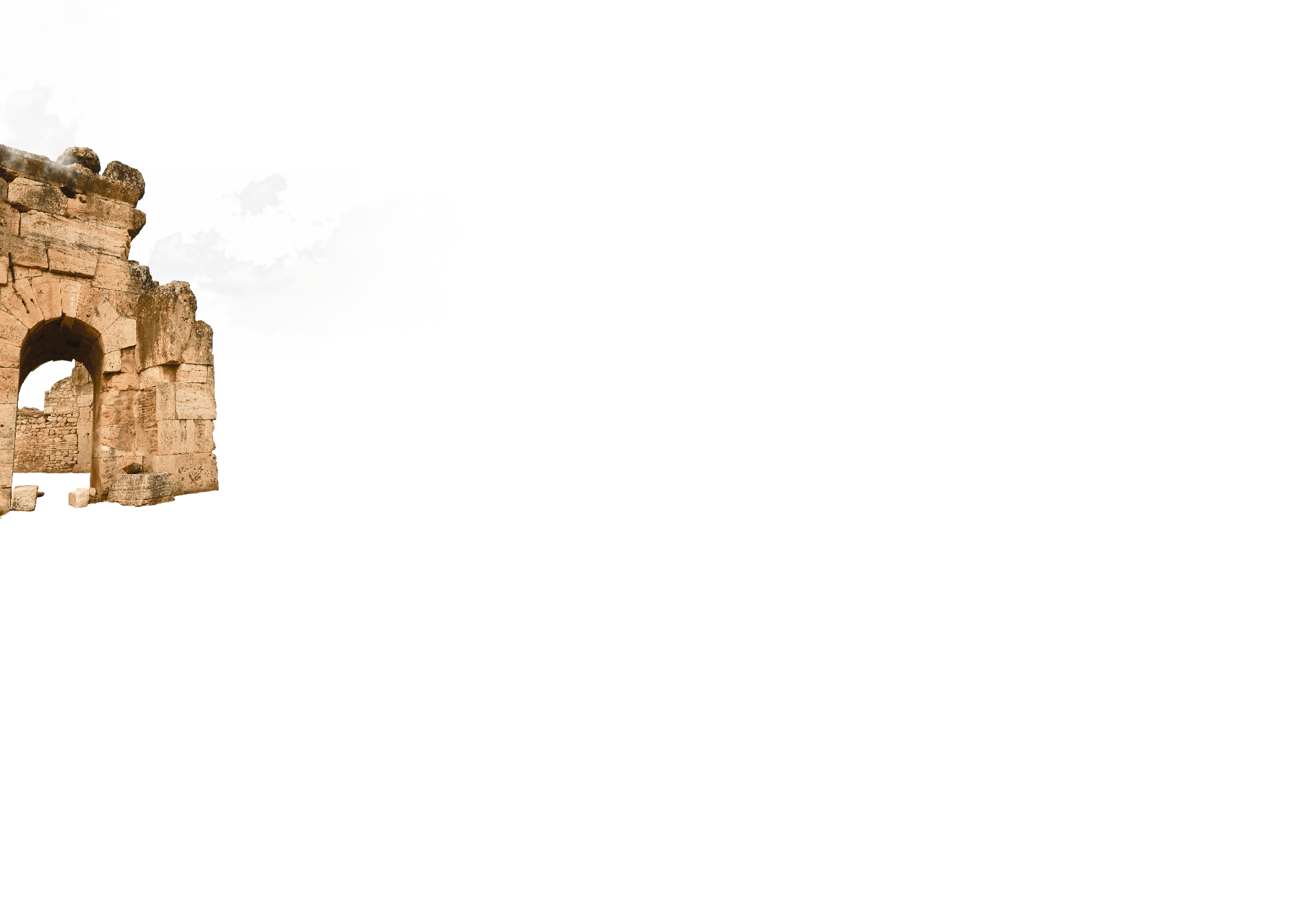 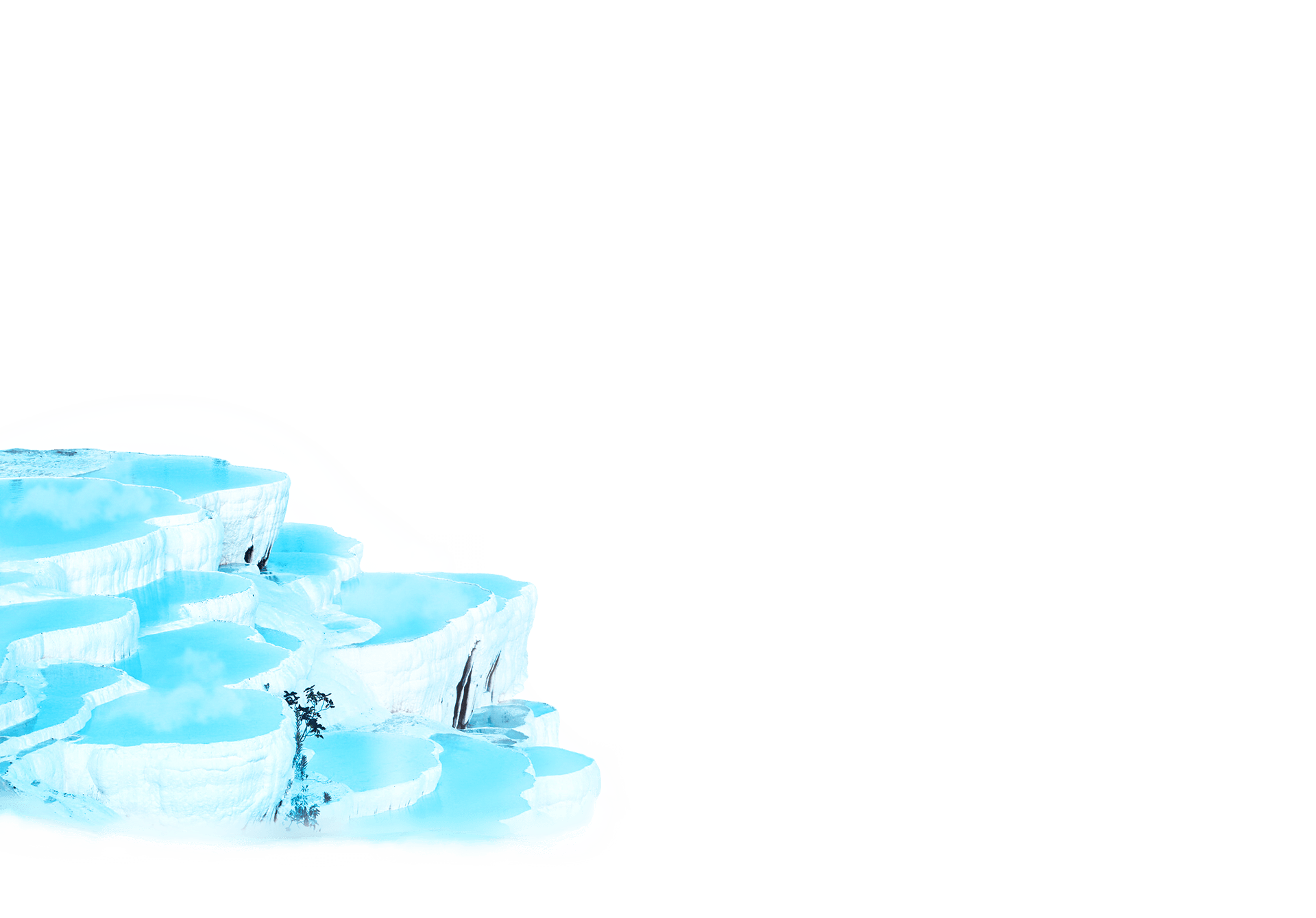 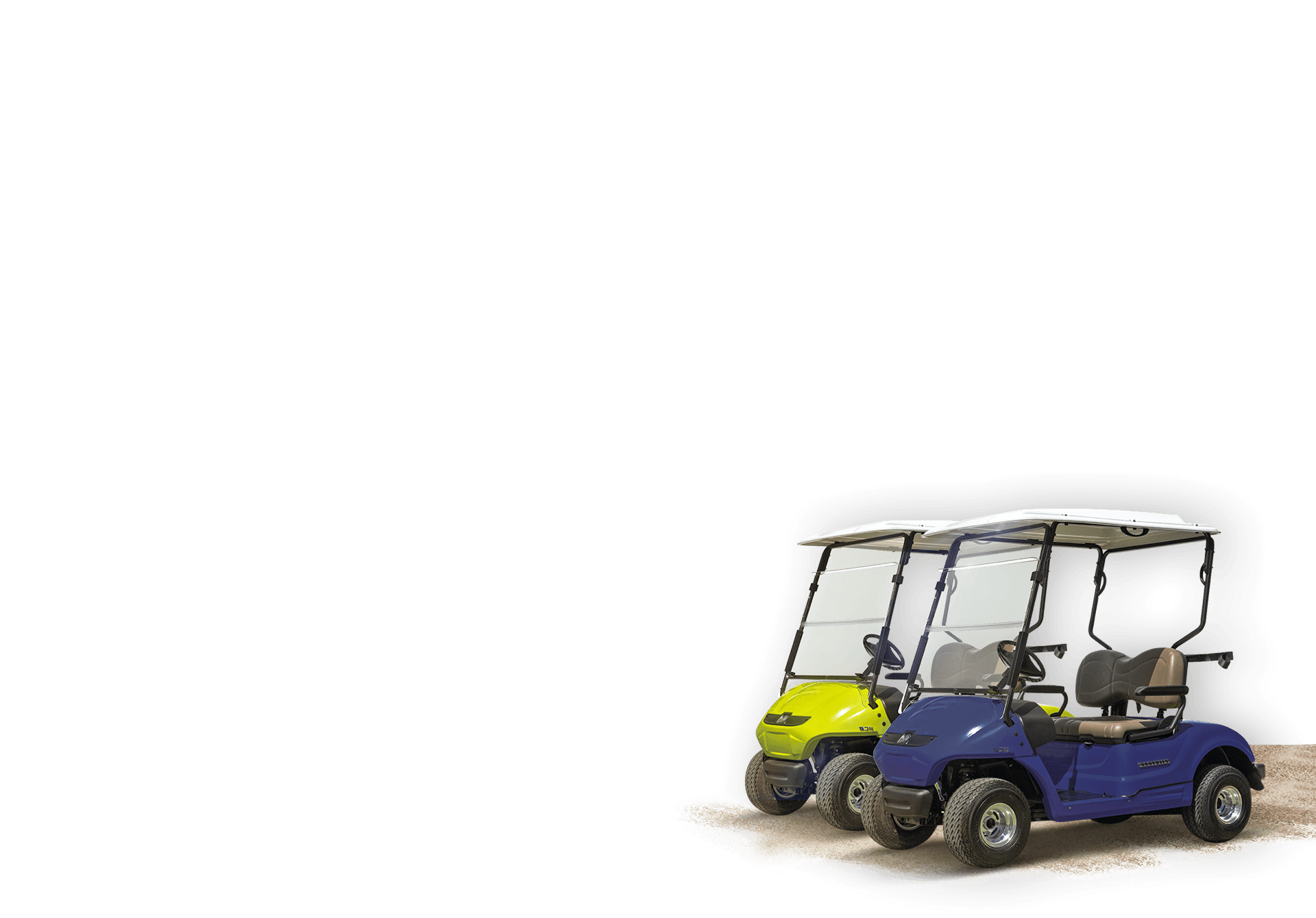 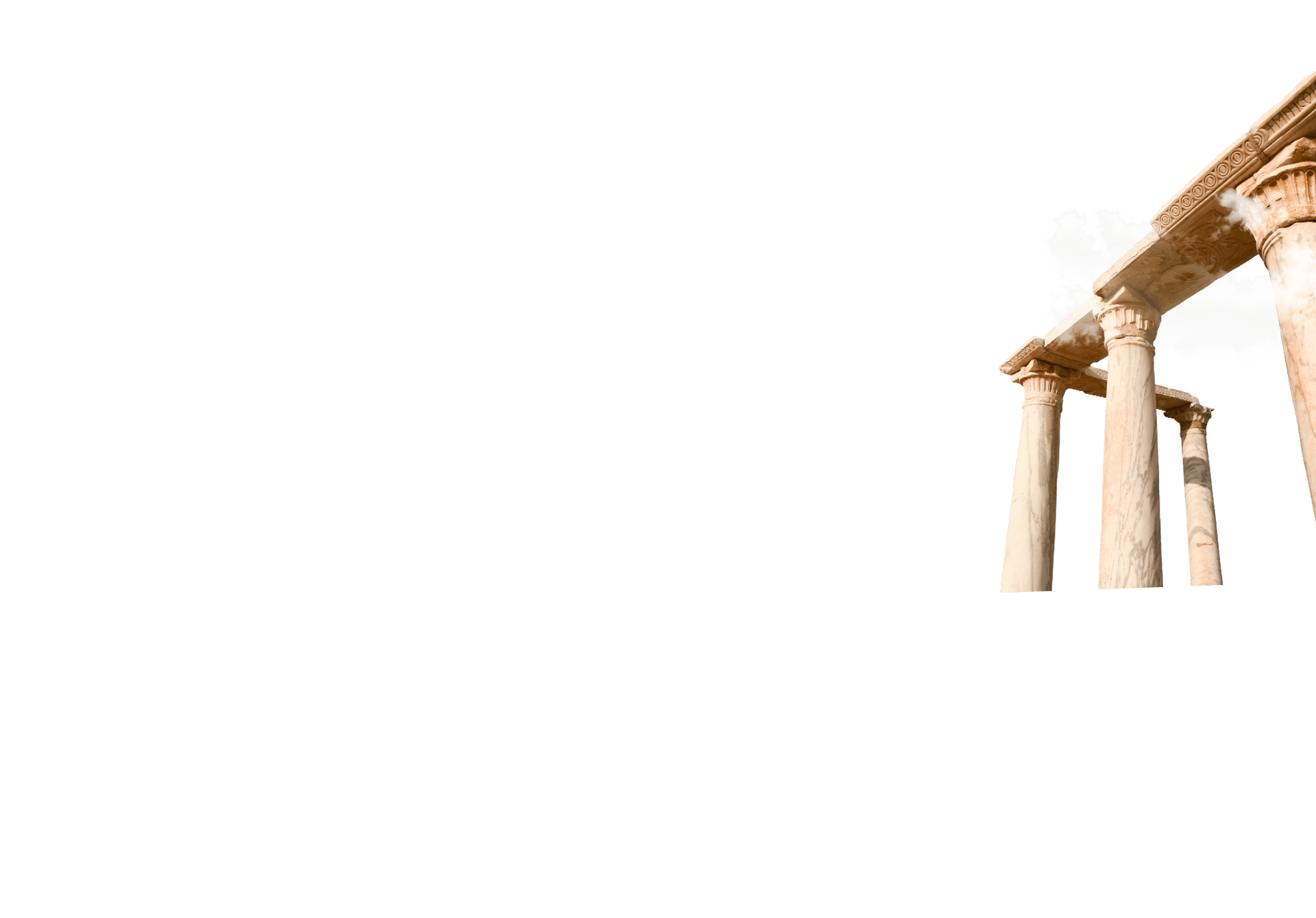 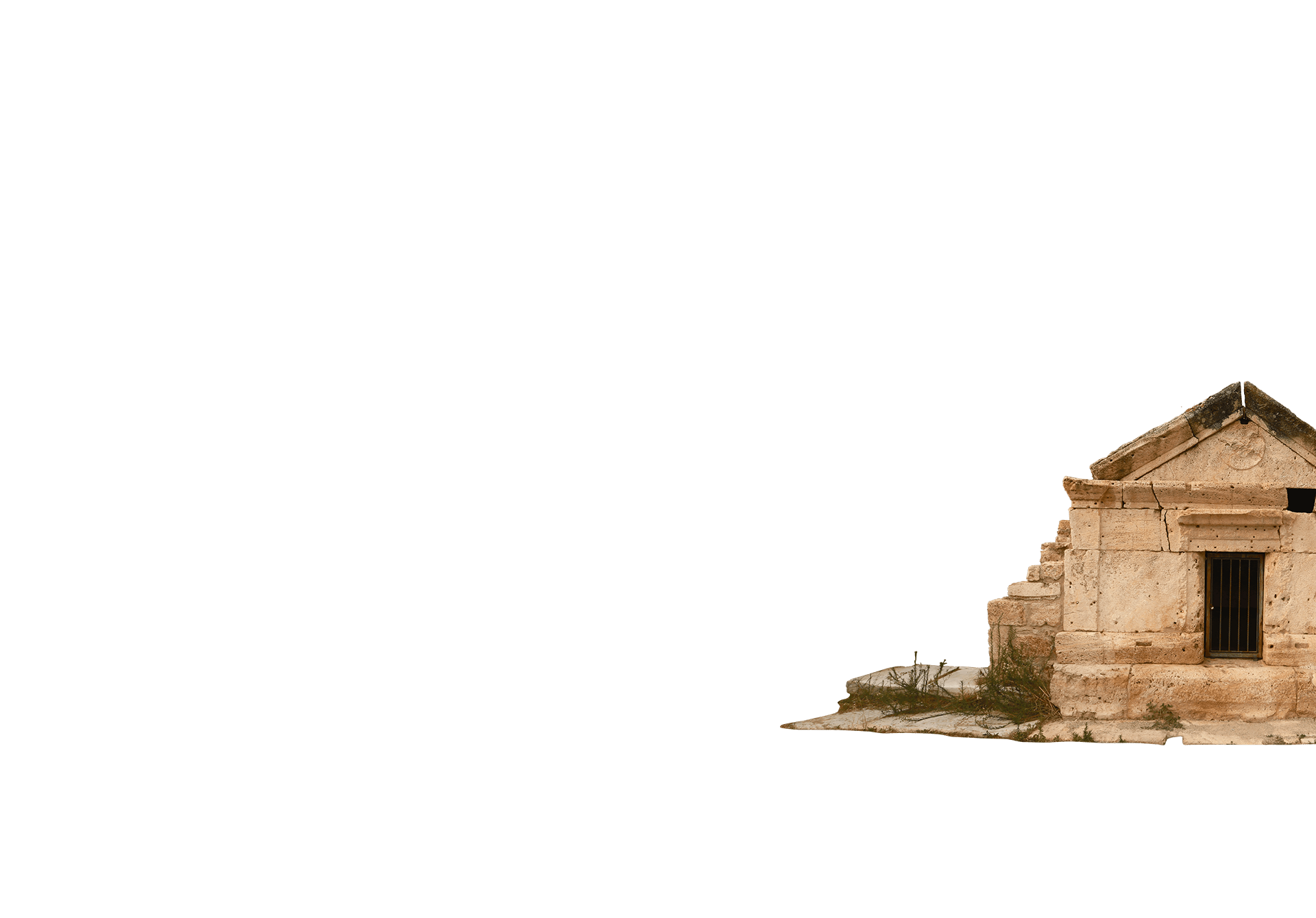 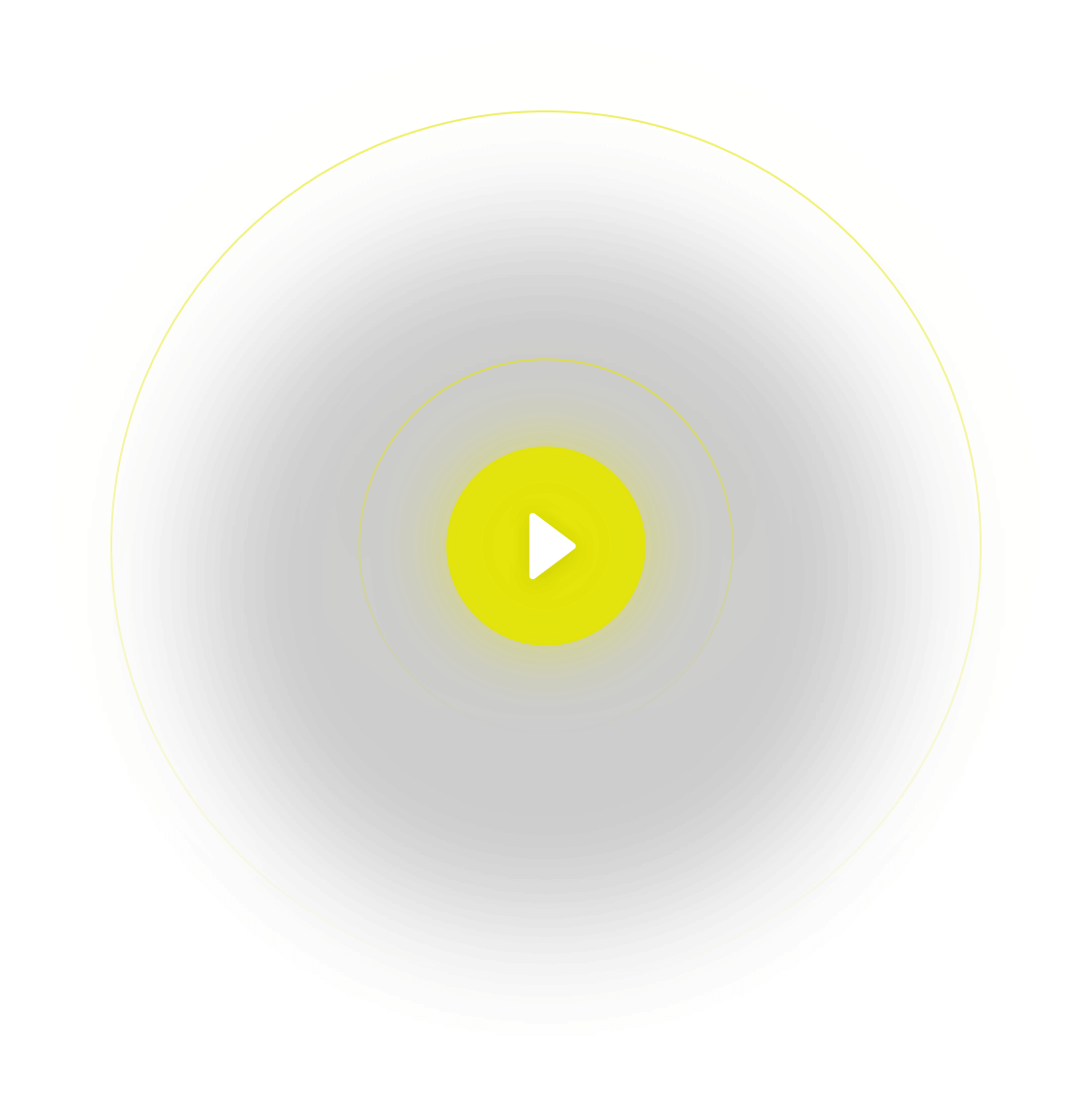 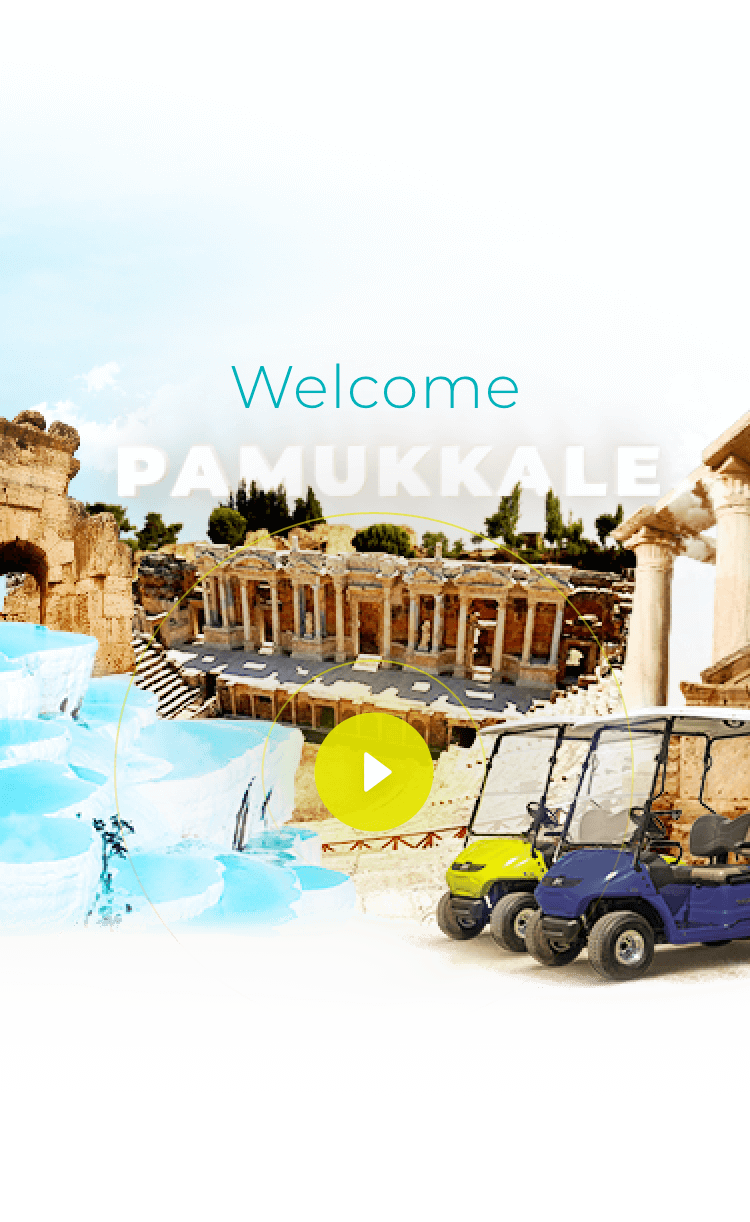 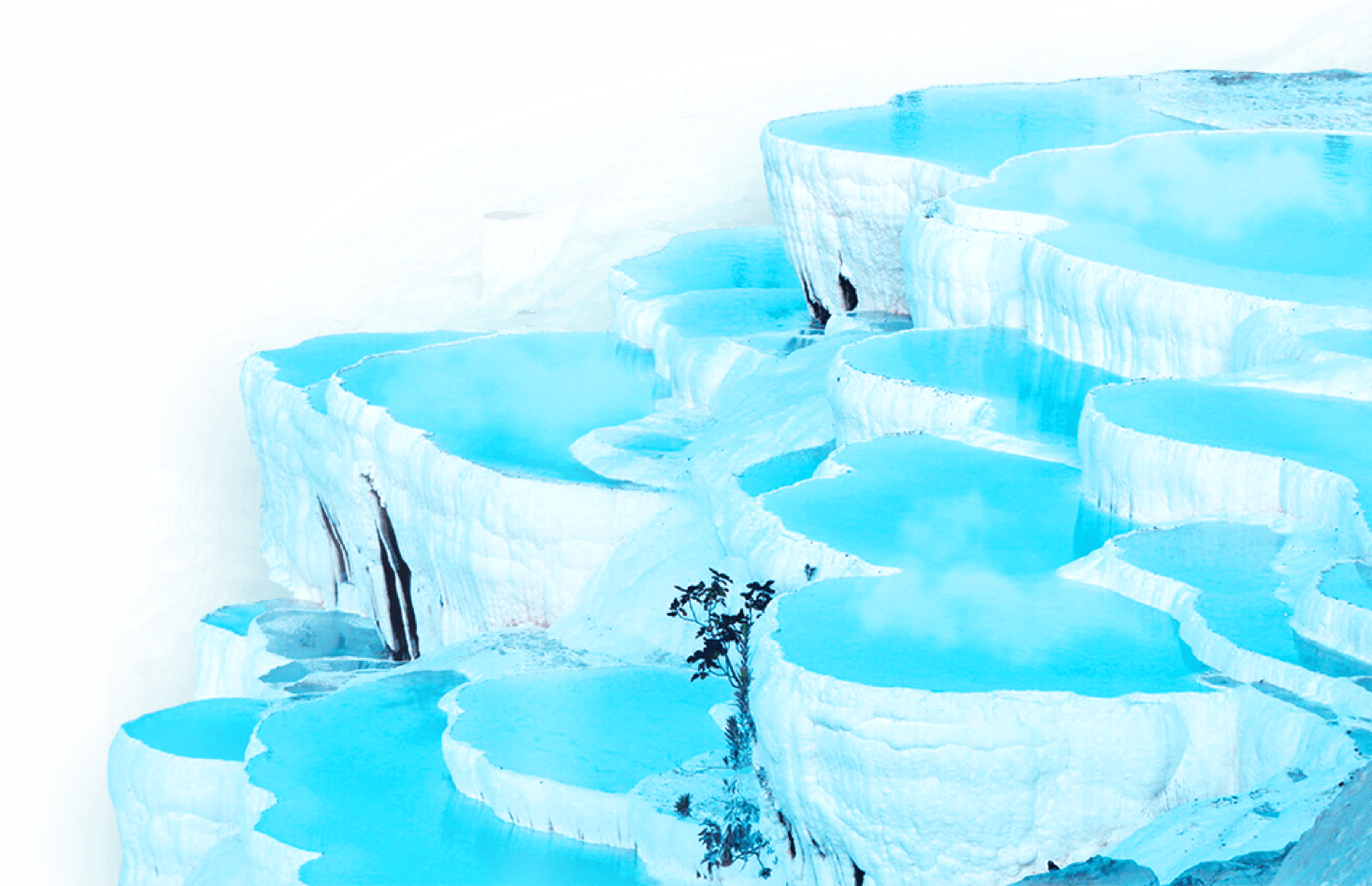 Pamukkale that has an unique scene with the travertines formed after a destructive earthquake by the hot springs 400 thousands years ago offers a visual feast.
The water supersaturated with calcium carbonate evaborates under the sun. Following the appearance of the white travertines which initially appear in the shape of gel are transformed into the crystallized rocks by solidifying.

The area that took the name of ‘Cotton Castle ‘ because of the initial softness and the white color of the travertines has 17 hot springs with temperatures ranging from 35 °C (95 °F) to 100 °C (212 °F)
After hot springs go out of the spring cover a distance of 320 m and come to the head of travertines where they flow through the terraces. 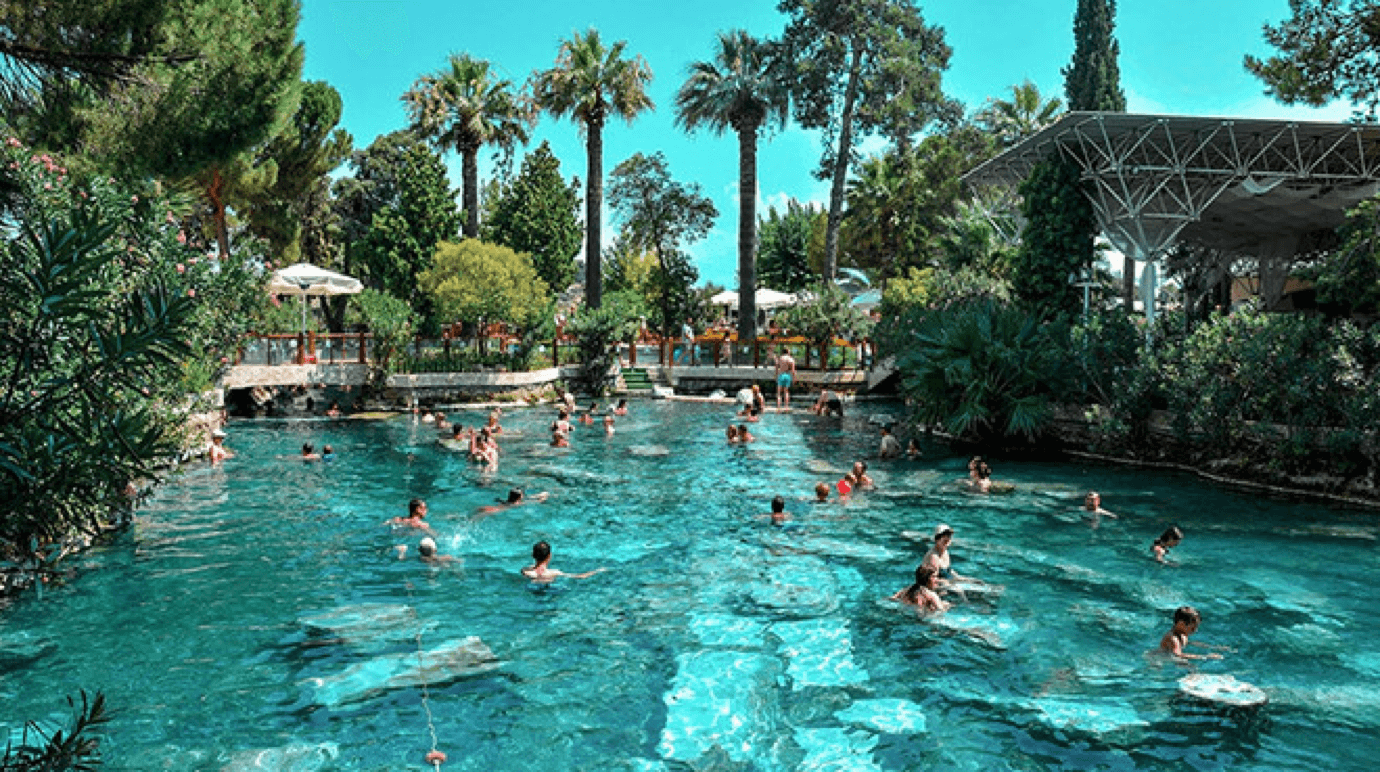 Especially in the period of the Roman Empire, Hierapolis and its site were a health center. In those years, thousands of people used to come to the baths, of which there are more than fifteen, and they found their remedy in those baths. Today’s Antique Pool was shaped by the earthquake which happened in the 7th century AD. The marble portico with Ionic arrangement fell into the spring during that earthquake.

The water in the thermal pool is 36–57 °C, pH value is 5.8 and radon value is 1480 pCi/l. The spa water contains bicarbonate, sulphate and carbon dioxide, as well as iron and radioactive combination. The water in this spring is suitable for taking showers and drinking cures, 2430 MG/liter melt metal value. 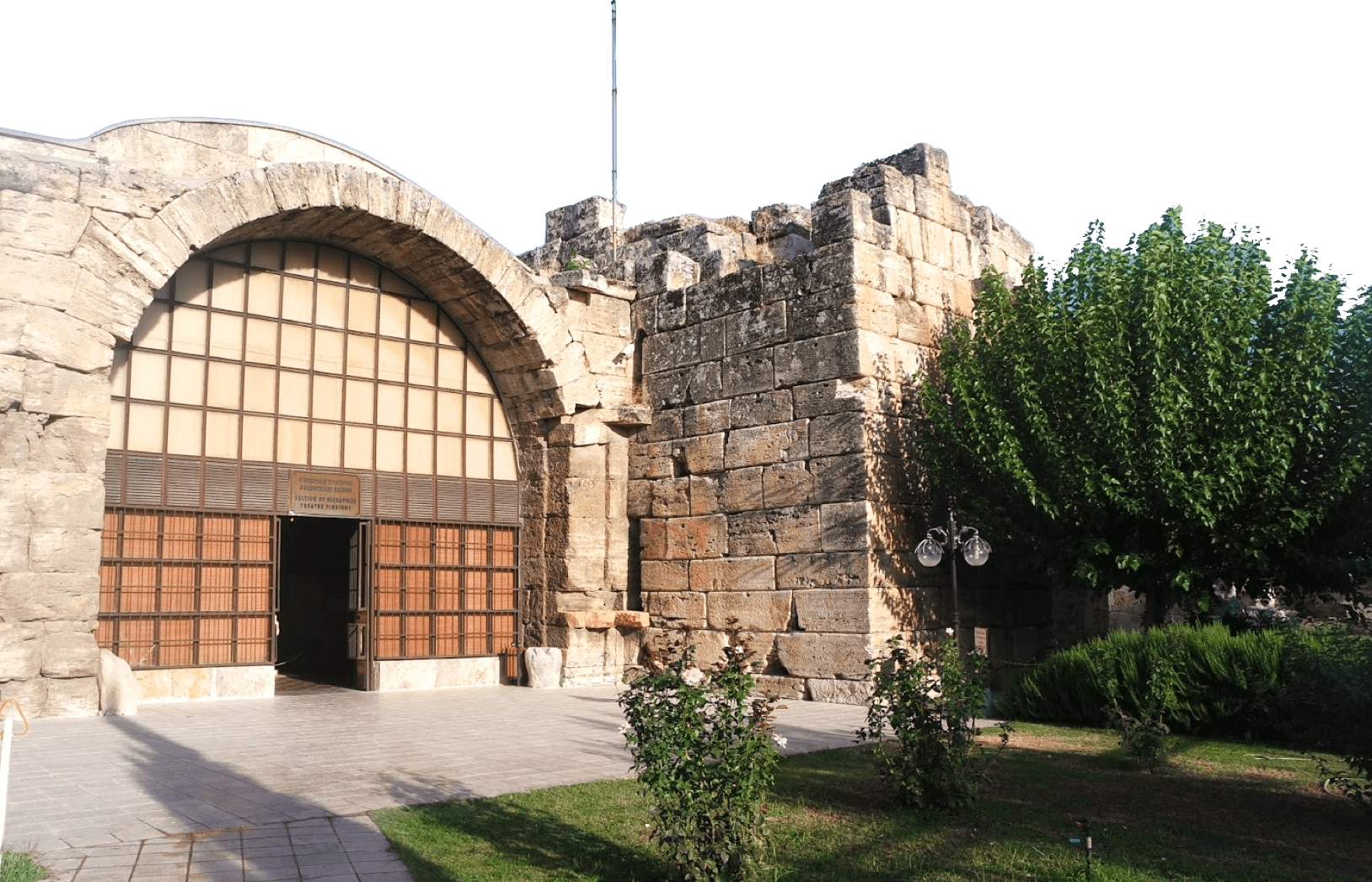 As a result of the roman bath restauration in 1970 ,the ancient city museum of Hierapolis was inaugurated on 1th february in 1984 by completing the works of exhibition and arrangement of the vestiges mainly discovered in the excavations of Hierapolis or brought from the other ancient cities . The museum was reinaugurated 24th April in 2000 after the restauration of damage over time in 1999.

The archaeological site museum of Hierapolis (Pamukkale ) covers an area of 14000 Sq m and is situated inside of the ancient city of Hierapolis.This big area consists of Antique Roman Bath , gymnasia and library.

The theater built by being laid on hill with its façade of 300 feet (91 m) long, the full extent of preservation is a huge structure. Its construction started in 62 AD following the eartquake of 60 AD and was completed in 206 AD during the reign of Severus.

The cavea has 50 rows of seat divided into seven parts by eight intermediate stairways.The diazoma, which divided the cavea into two, was entered by two vaulted passages (the vomitoria). There is an Imperial loge at the middle of the cavea and a 6-foot-high (1.83 m) wall surrounding the orchestra.The stage, which is 12 ft (3.7 m) high, had five doors and six niches.In front of these there were ten marble columns, decorated with alternate rectilinear and curved segments.

The wall behind the scene was decorated with three rows of columns one behind another. The columns on the front row do not have grooves and stood on octagonal bases.

CHURCH AND TOMB OF 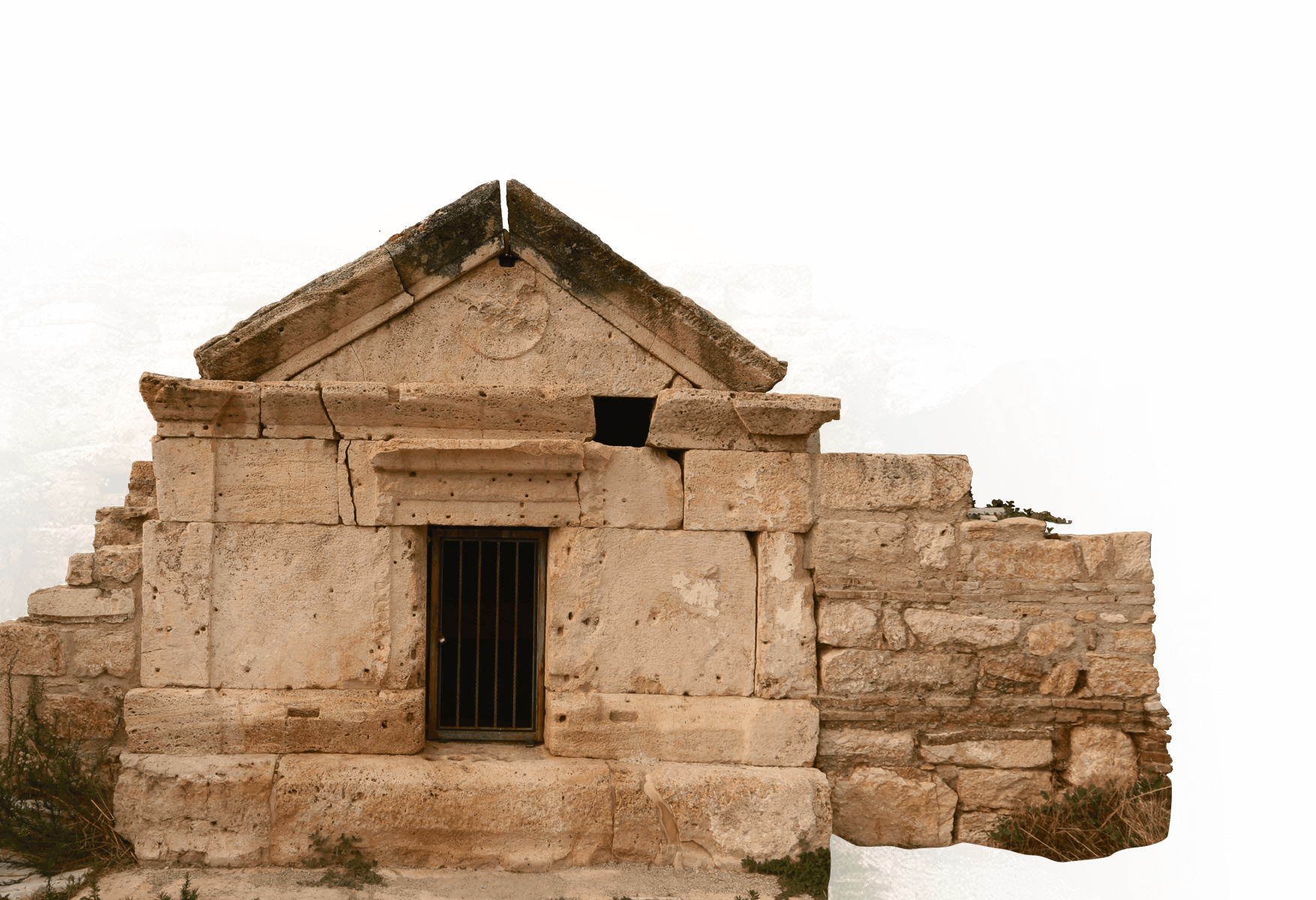 Martyrium, constructed at the end of 4th or at the beginning of 5th century is a central octagonal structure with a diameter of 20 metres.It was built as a monumental tomb in the memory of St Philipp by accepting that he was martyred in Hierapolis. Afterwards,It became one of the most attractive places soon after the Christianity was officialised by the roman emperor Constantin.

This structure is situated outside of the city walls and can be reached through a large stairways path. .It is understood from the archeological finds that it had had rooms from its four sides and porticos in its 2 façades. Moreover, there were 8 chapels which were separated from the polygonal rooms.

The access to the central chapel and an octagonal space is possible from the rooms that surround the structure. With this shape, it looks like a monument of double cross planned. It has a central octagonal structure with a diameter of 20 metres under a wooden dome which is covered with lead tiles. Martyrium and the other churches are significant from the point of revealing the importance of the Christianity’s history. 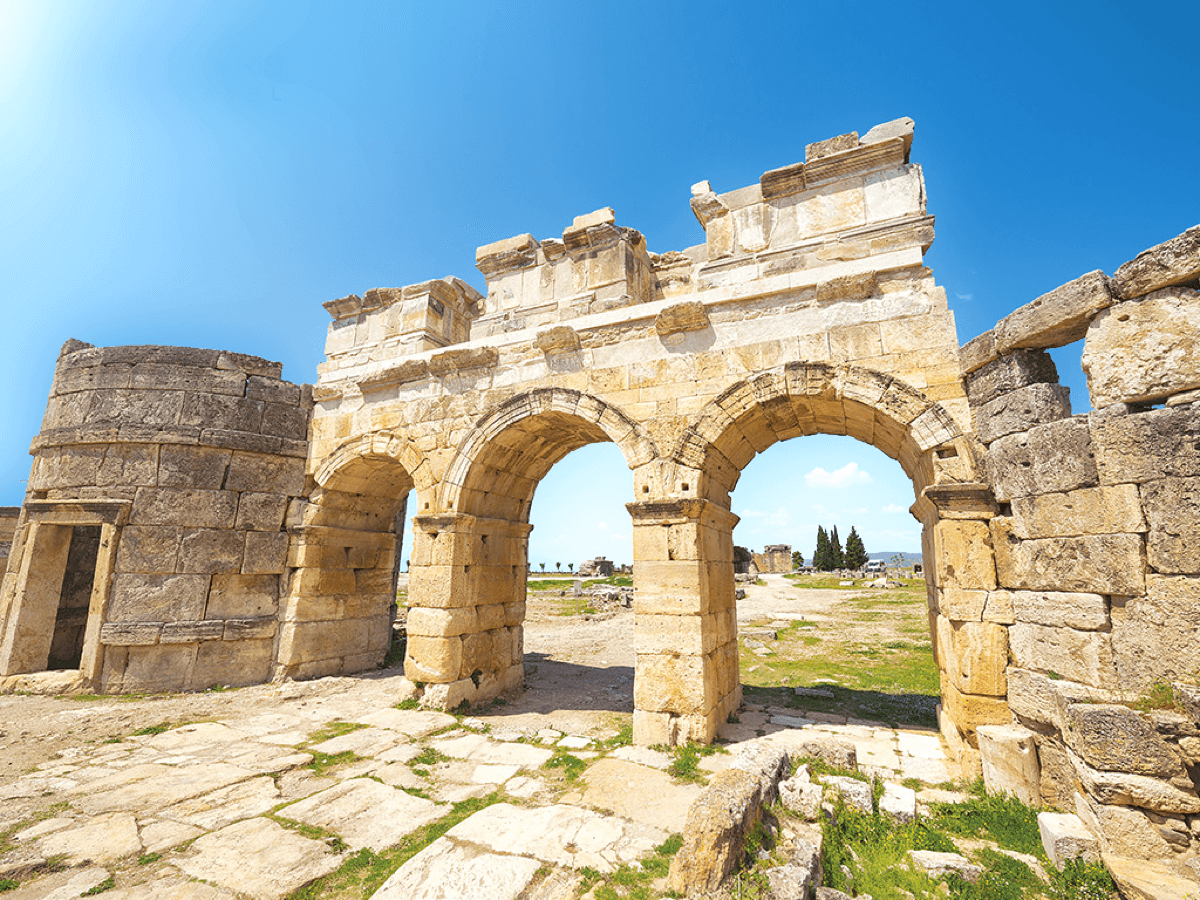 The gate which is situated at the northern entrance of the ancient city has 3 arches and 2 cylindrical small towers in its both sides. It was dedicated to Domitian and still preserves an inscription written in greek and in latin. Because of this , it’s called Domitian or Romain Gate.

It’s known that the gate was built in the years of 82 or 83 AD. It’s also called as the Frontinus Gate. 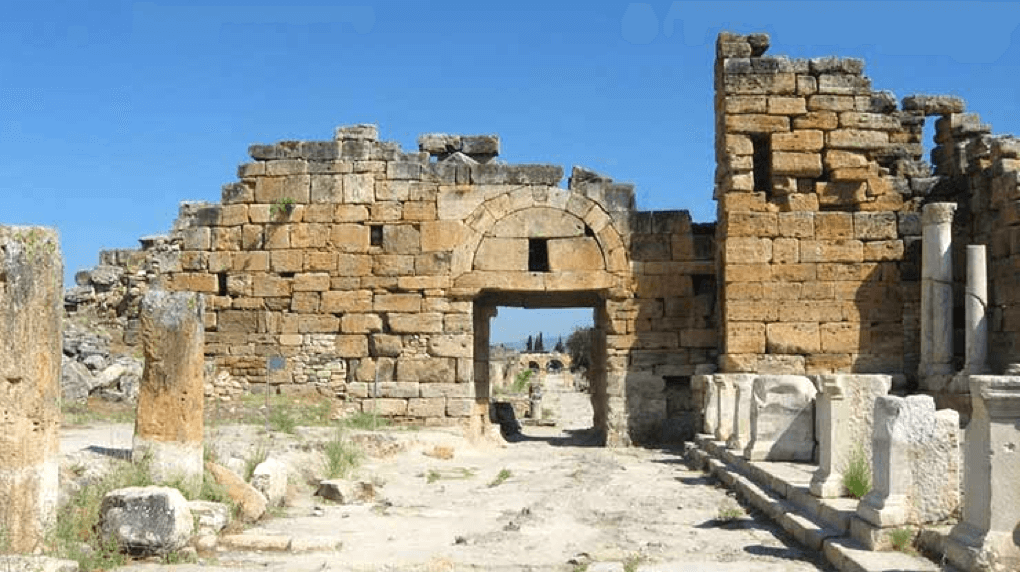 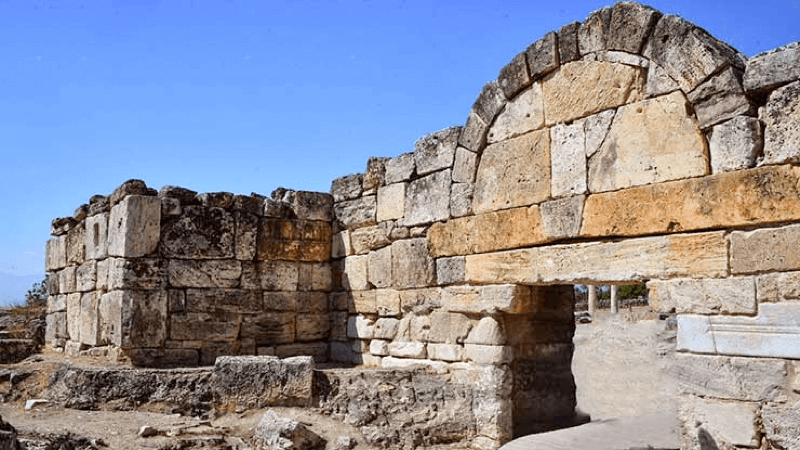 The Southern Byzantine Gate of Pamukkale Hierapolis Ancient City was constructed in the 4th century A.C. Travertine blocks and marble together with the other spolia stones were used in its construction. Just as in the northern gate, it was shaped with an arch laid over 2 square planned towers and a monolith architrave. This gate is shorter compared with the other one.

The southern gate was constructed by the roman emperor Theodosius I between 395 and 396 AD. following the legalisation of the East Romain Empire’s belief as the state religion. The city walls belong to this era as well. Two square towers surround the gate’s way. The structure is decorated with a cross figure. 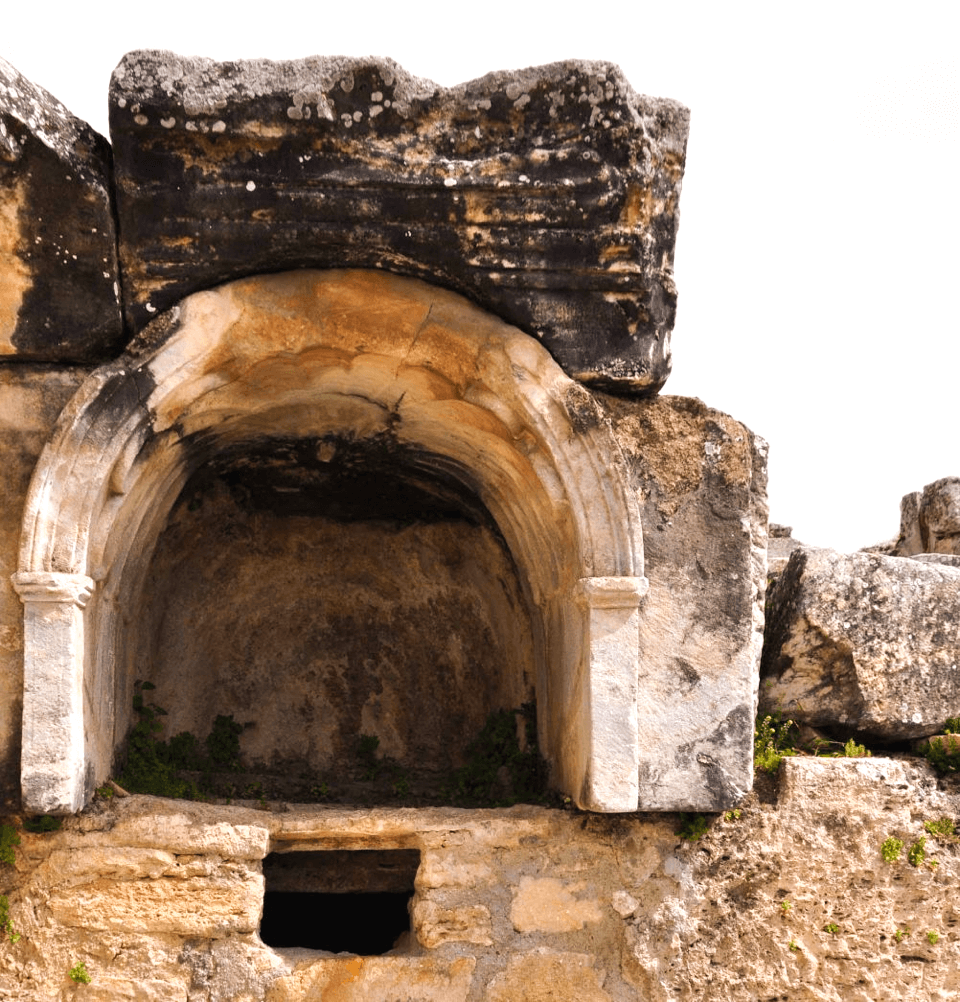 The access of a cave ( called Plutonium ) is situated near the vestiges of Apollo’s temple.

It was discovered during the excavations in 1960. It has 1.50 -2 metres of high and is deep towards inside. Due to death danger because of the carbon dioxide inside , its entrance is blocked with a square barrier of 1,5 m. 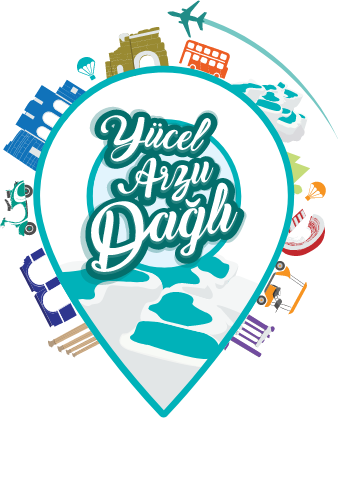